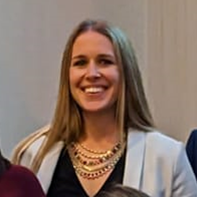 Winners of 2023’s 15 Under 40 were recognized at a special reception in their honor Thursday, Jan. 12, at the Manhattan Conference Center. Among the inaugural list of honorees is Jayme Minton, Support Services Director at Meadowlark.

“We are incredibly honored to recognize such a distinguished group of our inaugural 15 Under 40 Class,” said Jason Smith, president and CEO of the Manhattan Area Chamber of Commerce, in a press release. “Our membership has been committed to engaging young professionals for the past several years, and we feel very strongly that one way to engage is to recognize achievement.”

Winners were nominated from Riley, Pottawatomie, and Geary counties. Nominees were then asked to complete an application that outlined their achievements in their profession, as well as work in the community. From the nearly 100 nominees and more than 50 applicants, an appointed committee selected the final 15. To be eligible for nomination, individuals had to meet the following criteria: be over the age of 18 and under the age of 40 as of Nov. 30, 2022; be employed in the greater Manhattan region; and exhibit qualities as an up-and-coming star in their profession, leadership, and community service.

Jayme joined the Meadowlark team in June 2010. Prior to accepting her current position as Support Services Director in May 2015, Jayme served as the Human Resources Recruitment Coordinator, Bramlage Household Coordinator, and Human Resources Leader. In 2008, Jayme graduated from Kansas State University with a bachelor’s degree in sociology and a minor in anthropology. During her time at K-State, Jayme was a member of the rowing team.

Among other community involvement endeavors, Jayme serves as a co-chair of the Manhattan Chamber’s Classroom to Career program. She also participates as a committee member for the annual Mercy Community Foundation fundraising gala and coaches youth sports. Jayme is originally from the Lawrence, Kan. Area. She now lives in Wildcat Country with her husband, Cole, and son, Rowan.

Meadowlark is blessed to have Jayme as an organizational leader. Join us in congratulating her on this great honor!